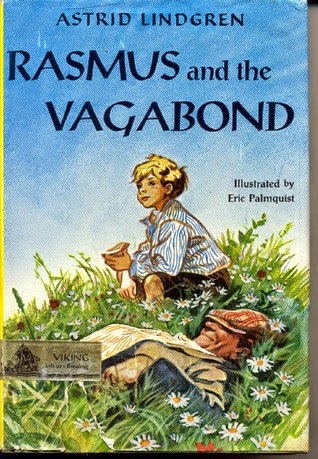 Rasmus and the Vagabond is very popular in Sweden with the title Rasmus pa Luffen. This is just one of the timeless classics written by author Astrid Lindgren. I'm sure you heard of Pippi Longstocking.

About the Book
After running away from an orphanage, nine-year-old Rasmus finds the world a cold and unfriendly place until he befriends an extraordinary tramp called Paradise Oscar. Together they meet more adventure than they ever imagined, solve a mystery, and catch the culprits.
Rasmus dreams of finding a family and a home someday. But when he does, will he be able to part with his new friend and life on the road?

I had the pleasure of reading this story, originally written in 1956, to my children. Rasmus lives in an orphanage and has his daily chores. He hides from Miss Hawk whenever he can. He's not a bad boy, but he does get bored with the same old day-to-day. His little friend Gunnar says they always pick the girls with the curly hair. That leaves Rasmus a little distraught. He begins his plans to run away from the orphanage.
He eventually runs into Paradise Oscar and the adventures begin.

Such a great book for your family's library.

Astrid Lindgren, the creator of Pippi Longstocking, Emil, and dozens of other world-famous characters, has thrilled three generations of children with her storytelling. She is the only children’s author with a literary prize, a theme park, a museum, a satellite, and a minor planet named in her honor. (After this last honor, she suggested changing her name to “Asteroid Lindgren.”) A jury appointed by Swedish Radio’s Culture Department to elect the “Author of the Millennium” voted Astrid Lindgren second after William Shakespeare. She was awarded the Hans Christian Andersen Medal and heaps of other awards and honors.


Disclosure (in accordance with the FTC’s 16 CFR, Part 255: “Guides Concerning the Use of Endorsements and Testimonials in Advertising”): Many thanks to Propeller Consulting, LLC for providing this prize for the giveaway. Choice of winners and opinions are 100% my own and NOT influenced by monetary compensation. I did receive a sample of the product in exchange for this review and post

a Rafflecopter giveaway
Posted by My Life N Kids at 2:45 PM