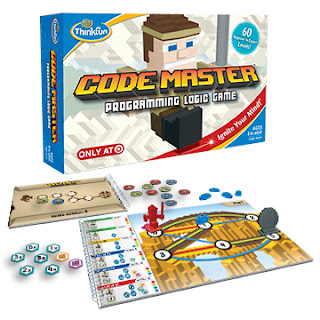 Such a fun game for the kiddos when they just want to play by themselves. The age suggestion is 8 yrs-Adult.

ABOUT THE GAME:
The Ultimate Coding Adventure! In Code Master, your Avatar will travel to an exotic world in search of power Crystals. For all 60 levels, you'll have to use programming logic to help your Avatar collect the Crystals and land at the Portal. Think carefully, in each level, only one specific sequence of actions will lead to success.


Having a game that makes you think is important for my children. With this game, the player is the computer. You set up your game board and figure out the sequence that helps complete each map. It gets a little more difficult as you so proceed in the game. If the program you played doesn't work you will have to rewrite it and try again.

My son had no issues catching on, but he did have to explain it to me because I'm slow with some of this technological genius stuff. Guess what? You don't have to be a genius. It's a fairly understandable game once you learn how to play.


Thank you to the folks at thinkfun for providing this game for review. All opinions are my own. 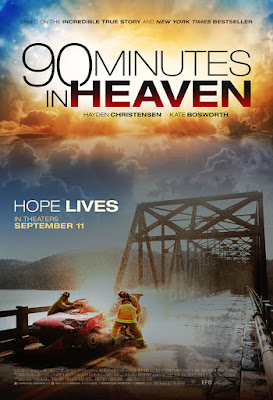 ABOUT THE BOOK
Pastor Don Piper died January 18, 1989 when a semi-tractor truck crushed his car.  Declared dead by the first rescue workers to arrive on the scene, Don's body lay under a tarp for the next 90 minutes.  Don's soul, meanwhile, was experiencing love, joy, and life like he'd never known before.  Don was in Heaven.

When another pastor's prayers helped bring Don back to life, he became a living miracle!  Yet this is one miracle Don wished never happened.  Heaven's bliss was replaced by excruciating pain and emotional turmoil.  With the support and prayers of his beloved Eva, their three kids, and friends near and far, Don clings to his faith in God and fights to regain a semblance of his previous life.  The Piper family's incredible true story of perseverance and overcoming the challenges of life - and death - will bring hope and encouragement to all who see it.

Many of you have probably already seen the previews to this movie. I just saw one myself a couple nights ago. I MUST SEE THIS MOVIE! Especially now that I've read the book! Such a moving story. The strength and courage this human being needed to get through a horrifically painful event in his life was only by the grace of God.

ABOUT THE MOVIE
This book is based on the movie so it's all in there.

Giving Films is passionate about sharing hope-filled movies and donating ALL of their profits to charities and ministries who serve those in need.  Beginning with their first film, 90 Minutes In Heaven, Giving Films is allowing all of us to be a part of making a difference.  Anytime you go to a Giving Films movie in theaters, visit http://www.givingfilms.com and select which charities you want to receive the profits from your ticket.  Their charitable organizations are Christian Alliance for Orphans, Faith Bridge Foster Care, Hire Heroes USA, Hope International, LifeWater, Street Grace, and World Vision.

90 Minutes in Heaven hits theaters on September 11, 2015! Check and see if it's playing in a theater near you.

GIVEAWAY TIME
Disclosure (in accordance with the FTC’s 16 CFR, Part 255: “Guides Concerning the Use of Endorsements and Testimonials in Advertising”): Many thanks to Propeller Consulting, LLC for providing this prize for the giveaway. Choice of winners and opinions are 100% my own and NOT influenced by monetary compensation. I did receive a sample of the product in exchange for this review and post.