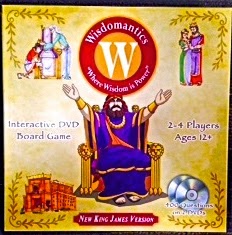 "HALLELUJAH!" he shouts from his throne....IF you get the right answer on the first try. How well do you know the book of Solomon? I must tell you that this was super fun for our family! Tuesday nights are family game night for us and we were super excited to have a new game to play. 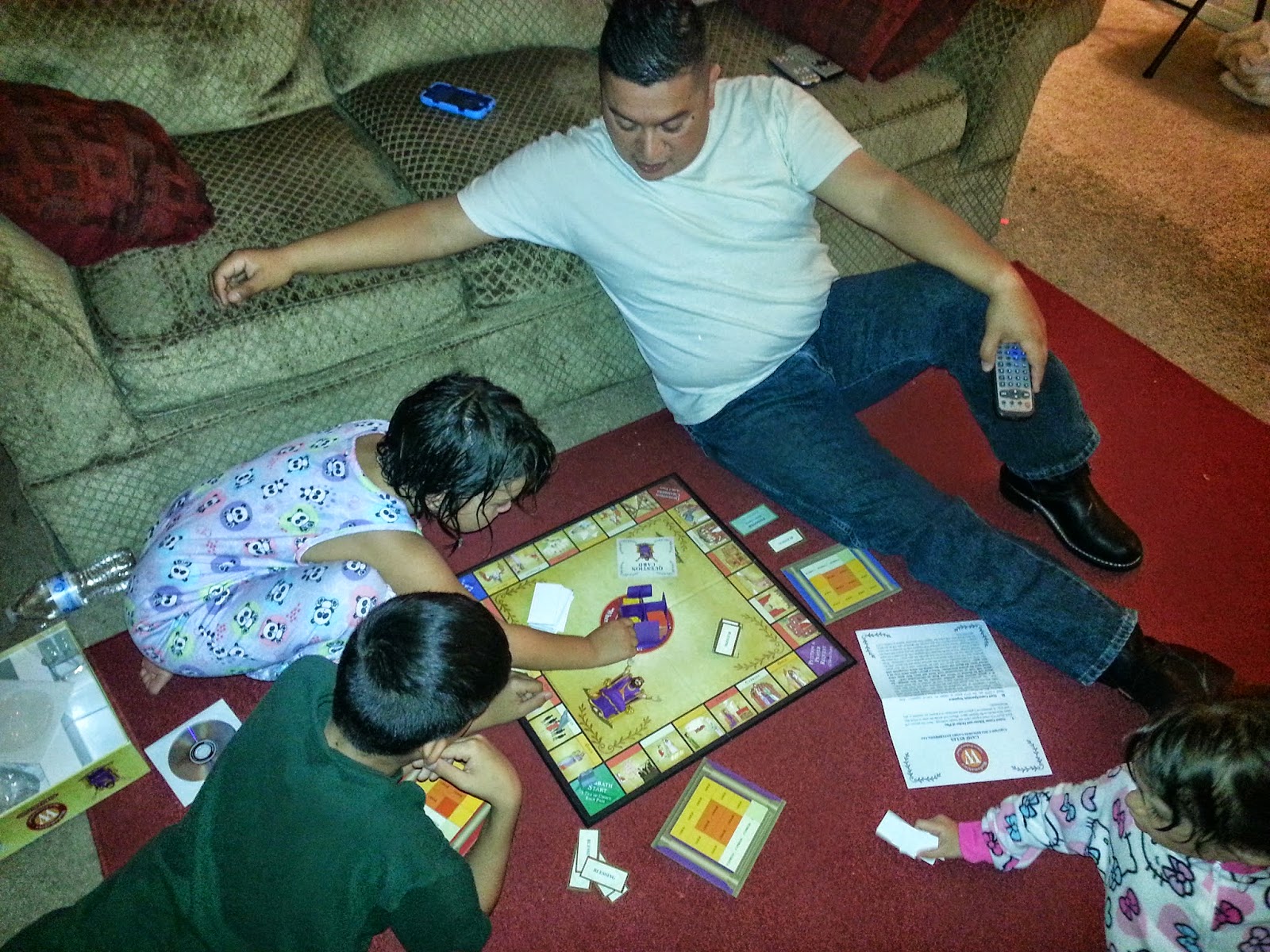 Wisdomantics–New King James Version (NKJV) is an interactive DVD board game for players of various faiths who desire to gain the vast wisdom of King Solomon. Wisdomantics-NKJV utilizes the proverbs of Solomon and blends chance, knowledge and strategy to create a fun experience while you learn! The game’s intent is to bring individuals together to learn how to cope with numerous situations in a fun and relaxed environment. Inside the box you’ll find 2 interactive DVDs with 400 questions, score cards, blessing cards, and more! 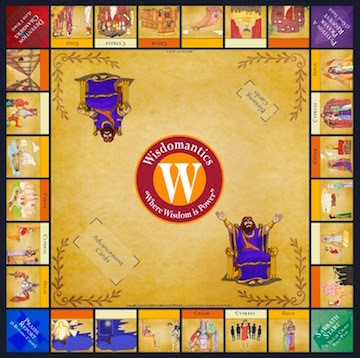 The game says it's for ages 12 and up probably because of some things that come up from the book of Solomon, but our 5,7, and 11 yr olds played with us and even guessed some right answers. Everyone was shouting Hallelujah!

Not only is this a fun family game, but such a great way to memorize scripture. My kids attend AWANA Clubs so some of these verses they already knew and had memorized. It's so exciting to get it right on your 1st try! Do not fret...if you get it wrong, the other players get to more chances to get it right ;). We did not use the online printables, but we will next time! The Question Tracking sheet is very important. It will prevent you from clicking on the same question twice.
If this sounds like a game you and your family would enjoy check out their official website for more info.

GIVEAWAY TIME
Disclosure (in accordance with the FTC’s 16 CFR, Part 255: “Guides Concerning the Use of Endorsements and Testimonials in Advertising”): Many thanks to Propeller Consulting, LLC for providing this prize for the giveaway. Choice of winners and opinions are 100% my own and NOT influenced by monetary compensation. I did receive a sample of the product in exchange for this review and post.Only one entrant per mailing address, per giveaway. If you have won the same prize on another blog, you are not eligible to win it again. Winner is subject to eligibility verification
Read more »
Posted by My Life N Kids at 5:33 PM No comments: 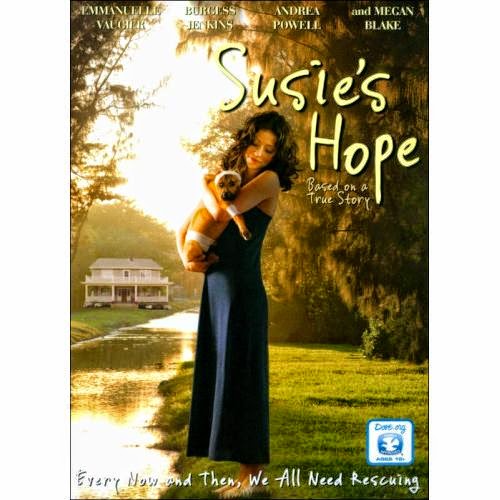 I am a big animal lover so this was an emotional film for me. Pit bulls have a bad record here in the states. We hear the argument time and time again. Nobody should ever own a pit bull or they're great family dogs. What do you do? What are your thoughts?

To me it's not even about the breed of the dog. If you love your animal they will love you back. This story happens to involve a pit bull. Which is why I brought up that specific breed.

Donna suffers a great loss, but she turned this tragedy into something good that other animals will benefit from for a long time. A truly outstanding story of strength and courage.

About the movie
Run time 105 minutes
Based on the true story that successfully passed Susie’s Law in North Carolina, which seeks stricter punishment for animal abusers, Susie’s Hope brings to life the inspirational relationship between pit bull attack survivor Donna Lawrence and Susie, a pit bull-mix puppy found beaten, burned and left for dead. Recognizing reflect and abuse were to blame for the tragic attack that nearly claimed her life 10 months earlier, Donna resumes the battered animal and accepts her as family. Together, they learn to heal, love and forgive as thyey lead a historic effort to seek justice and protection, not only for Susie, but all animals. Starring Emmanuelle Vaguer (40 Days and 40 Nights), Burgess Jenkins (Remember The Titans) and Andrea Powell (Ender’s Game, The Twighlight: Breaking Dawn Saga: Part 2), Susie’s Hope is an incredible story of love, loss and redemption.

About Susie
Susie was found nearly dead in Greenfield Park in Greensboro, North Carolina on Aug. 20, 2009. Just a puppy, Susie had licked the face of her owner's newborn baby. Her owner became violent--She was beaten so severely her jaw was broken. That wasn't enough, though. She was then set on fire and left for dead.
Incredibly and against all odds Susie survived. Donna Lawrence adopted her 2 months later. Susie is now a trained therapy dog and even won the American Humane Association's American Hero Dog this year! 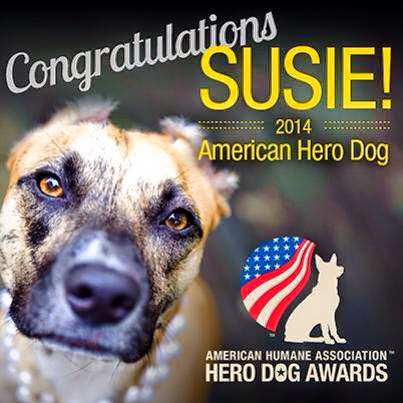 Get all the info you need at Susie's Hope website. You can also make donations to their charity.

Disclosure (in accordance with the FTC’s 16 CFR, Part 255: “Guides Concerning the Use of Endorsements and Testimonials in Advertising”): Many thanks to Propeller Consulting, LLC for providing this prize for the giveaway. Choice of winners and opinions are 100% my own and NOT influenced by monetary compensation. I did receive a sample of the product in exchange for this review and post.Only one entrant per mailing address, per giveaway. If you have won the same prize on another blog, you are not eligible to win it again. Winner is subject to eligibility verification
Read more »
Posted by My Life N Kids at 1:22 PM No comments:

The Gospel of John *LUMO PROJECT*

FOUR GOSPELS. FOUR FILMS. ONE JESUS STORY.
FOR EVERYONE.

I had the pleasure of viewing the Gospel of John. I had the option of watching the narrative in KJV, NIV, or Spanish. This was so powerful to watch. The book of John really comes to life. I know this is just about the 4 Gospels, but it would be great to have this visualization and narration for every book in the bible! There's so much emotion. It's not like any other biblical piece I've seen before.

I really enjoy reading the book of John. It begins with the witness and affirmation of John The Baptist. It concludes with the death, burial, resurrection, and post-resurrection of Jesus. We can't forget all the miracles that Jesus performed so that we would believe. 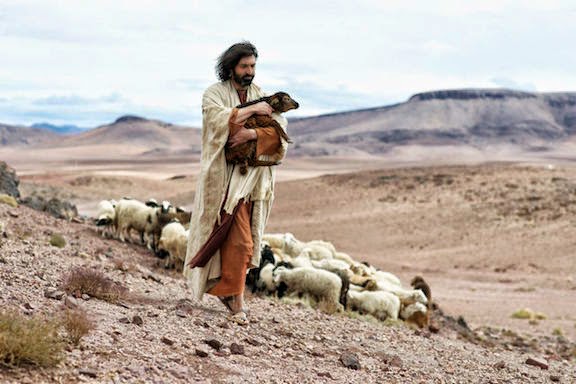 THE GOSPEL OF JOHN
The Gospel of John takes the story of Jesus from John’s gospel with its own unique characteristics. For John, Jesus is the Word of God made human. John is clear that that when encounter Jesus, we encounter God.  The gospel writer points to the miracles (the ‘Signs’) and teachings as evidence of Jesus’ special relationship as the divine Son of God.

This full-length feature film about the life of Jesus takes the actual Gospel text as its script, word for word, unedited. Five years in the making, this epic production has been critically acclaimed by leading religious scholars as a unique and highly authentic telling of the Jesus story. Narrated by leading British actor David Harewood (‘Homeland’, ‘Blood Diamond’, ‘Merchant of Venice’) it is based on the latest theological, historical and archaeological research. With specially constructed sets and the extraordinarily authentic villages and countryside of rural Morocco, it immerses the viewer in the world of first century Palestine. 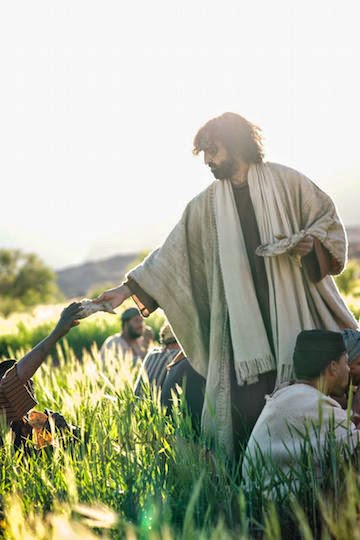 You can watch The Gospel of John just hit Netflix on December 1st so make sure you go check it out.

Get more information about this amazing project


Thank you to FlyBy Promotions and LUMO PROJECT for this review opportunity
Posted by My Life N Kids at 9:43 AM No comments: