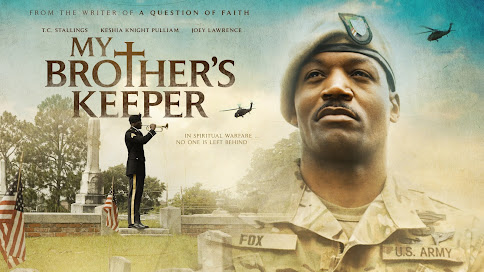 What a powerful film! Being an Army brat, and still part of that military life as a wife, I feel the very real struggles portrayed in this film in the depths of my heart. PTSD is serious, and many of our returning vets struggle daily. We must remember that we all have struggles, and those struggles look different, but God is there to help us through. We must call upon Him and cast our burdens upon Him. We are not struggling alone in this world! Hallelujah!

"MY BROTHER’S KEEPER shares the story of returning war veteran SFC Travis Fox (TC Stallings) who has one more battle to fight - PTSD. Fox and his best friend SFC Ron “Preach” Pearcy (Joey Lawrence) are in their 6th combat deployment when Preach and his entire Ranger platoon are killed in a deadly improvised explosive device attack. Travis returns to his hometown to settle the affairs of his parents who had passed away years before. In searching for answers about his parents, he also discovers a new obstacle in PTSD. He finds support from church counselor, Tiffany Robertson (Keshia Knight-Pulliam) and slowly begins to rediscover his faith in God, until he discovers a secret. Travis uncovers a secret hidden by his best friend Donnie Berry (Robert Ri’chard) that threatens his new-found faith, restores his guilt, and causes him to consider the unthinkable."

I urge you to take some time to go see this movie.

Check HERE to see if it's playing in a theater near you!

Your church may even be able to host a viewing through the Faith Content Network. Check HERE for that information. 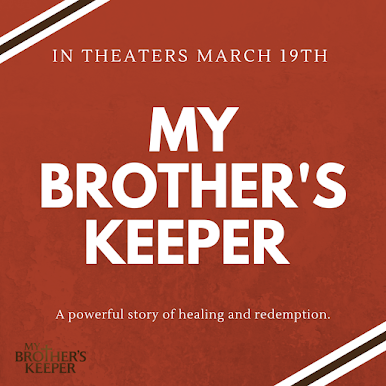 There is an exciting opportunity that you can be a part of! There's an open social campaign where you can enter to win a warrior Bible! In addition, you can be entered to win a grand prize Zoom call with the lead actors in the film: T.C. Stallins, Keshia Knight Pulliam, and Robert Ri'chard! Check out the link below and good luck to all of you who enter!

Many thanks to Collide Distribution for providing this product/product information for review. Opinions are 100% my own and NOT influenced by monetary compensation. I did receive a sample of the product in exchange for this review and post.(only North American winners). Note: Since this is a theatrical release, the digital code will not be available until the film is released on home entertainment.

a Rafflecopter giveaway
Posted by My Life N Kids at 10:08 PM