McNeill Designs for Brighter Minds has given us another opportunity to review a different version of the game "You've Been Sentenced," and we were very excited to start playing! The You've Been Sentenced game has earned over 10 national awards. I was surprised this game was winning awards back in 2007. Where have I been and why didn't I know about this game sooner?! This game is great fun for the whole family! I have recently been given 4 extra children to care for, and a house with 7 children needs fun games that everyone can play. Also being a homeschooling mom, I'm always looking for fun, innovative teaching tools. This is great for our language art studies! This particular game is for ages 8 & up, takes 30-40 min to play, and takes 3-10 players.

Here's What They Say: 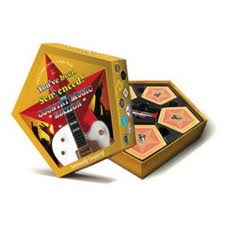 The real fun begins when players have to read their sentences out loud and explain what they mean to the rest of players. They form the jury and vote thumbs up or down on whether the sentence and justification stand and the points are scored. 540 cards with over 2,500 words insure billions of possible sentences so the game is never repetitive and has unlimited re-play value. Multiple other methods of play are available on the website that turn "You've been Sentenced!" into not just a game, but a full game system!

Socially interactive, players become members of the Jury and can ask a player to justify and defend the grammar, sense and meaning of the sentence. The player has a chance to convince the Jury to accept their often outrageous and hilarious sentences.

What We Have To Say:
The sentences people come up with can be hilarious! So to play everyone starts out with 10 cards. They must use the words on the cards to make a grammatically correct sentence. You don't have to use all 10 cards but it earns you more points if you do. This country music version has great country words such as square dancer, fishing pole, and knucklehead.

We had so much fun playing this game! It didn't take long before we had to form a jury to vote on the crazy sentences we made up.
In the beginning of the game my son made some pretty crazy sentences that were not grammatically correct. By the end of the 5 rounds we played he was making some great sentences. We could not stop playing we were having so much fun. I think we played for a good 3 hours before we finally called it quits. My son was literally in tears because he was laughing so hard. OK, a lot of us were. I agree that this game is great for kids to learn on as well as adults. There are so many different ways to play this one game! Their website even has a lesson plan. Learning can be fun! We are so glad and thankful to add this game to our game closet because it will get lots of use!

GIVEAWAY TIME
1 winner will receive their own game "You've Been Sentenced: Country Music Edition"
I received a copy of the listed game for this review. All opinions are my own.

a Rafflecopter giveaway
Posted by Unknown at 11:12 AM