It's the Christmas season and the question "What do you tell your kids?" is starting to surface. I just wanted to share how it works in our house. My kids see Santa impersonators and call him Santa. They're not anti-Santa. My youngest doesn't really understand it all to begin with. My other 2 know that it's a regular person like us dressed up in a costume. 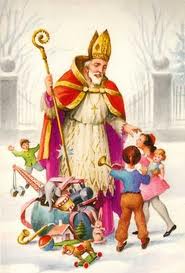 I do share the story of St. Nicholas with them. The true story of Santa Claus begins with Nicholas, who was born during the third century in the village of Patara. At the time the area was Greek and is now on the southern coast of Turkey. His wealthy parents, who raised him to be a devout Christian, died in an epidemic while Nicholas was still young. Obeying Jesus' words to "sell what you own and give the money to the poor," Nicholas used his whole inheritance to assist the needy, the sick, and the suffering. He dedicated his life to serving God and was made Bishop of Myra while still a young man. Bishop Nicholas became known throughout the land for his generosity to the those in need, his love for children, and his concern for sailors and ships.*
The story we tell our kids is of God's greatness and goodness. We open our bibles and read the Christmas story. The greatest gift ever given was God's son Jesus Christ. We now have a hope and peace that can't be replaced or outdid by any human gift. We tell our children that God has blessed us throughout the year so that we can bless them and others with gifts. We do a lot of donating throughout the year and even more in the month of December. We go shopping so they can pick something out for others. We want our kids to have an understanding that it's not what they get, but what they give, and that doesn't stop with materialistic things either. Why not have this mentality and spirit year round? It doesn't just have to be the Christmas season to pour out love and blessings. 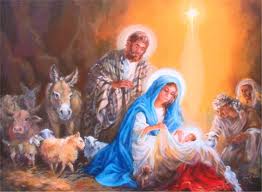 We still sing all the Christmas songs whether Santa is mentioned or not. We still have ornaments and wrapping paper with Santa on them. It's not like we pretend the persona doesn't exist.
I have told my kids that they are not allowed to tell other children that Santa isn't real. Those children will find out one day and it's not my kids' place to interfere. My kids know the truth about it. Someday these other children will eventually find out that Santa doesn't really come to their house when they're sleeping, so we don't even go there. Now, they are free to share why WE celebrate Christmas. Everyone should be aware of that!

My kids are still very excited to see what is put under the tree for them. It's still a joyous and "magical" time. I just pray that my kids will always remember the reason for the season and will pass it on to their children. If it wasn't for Jesus there would be no gifts under a tree, no Santa, and no Christmas.

*Info from St. Nicholas Center
Posted by My Life N Kids at 7:27 PM