WE WILL NEVER FORGET

We will remember for the rest of our lives what we were doing Sept 11, 2001. That was the day that America changed forever. I was at home with my husband, who had recently broken his ankle at work. His friend called from North Carolina to tell us that an airplane had just hit the World Trade Center. My husband thought he was just making things up or something. I remember him repeating himself, "Are you serious? Are you sure? You're serious?" We turned on the news a couple minutes before the second plane hit the second tower. Staring at our TV in disbelief, we didn't speak to each other at all. We just watched and listened in shock. Then the reports started coming in about the Pentagon and the Pennsylvania crash. Not long after that day, my husband was put on orders with his unit and life as we know it continues. 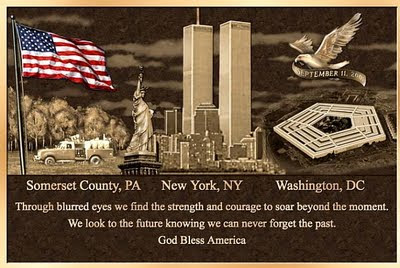 Ten years later, we are still shocked by footage of that day.
Ten years later, we are still in an ongoing war to keep America safe from the terrorists who hate our country.
Last night I couldn't sleep and I was watching one show after the next dedicated to 9/11. I was so emotional! The people who sacrificed themselves to make sure others were safe. They kept playing phone messages that were left to loved ones when they realized their end was near. The ones that hurt the most were the ones who thought they were fine and everything was going to be OK. They had no idea what was happening around them.
My prayers are with those who lost loved ones on that horrific day. A big thank you goes out to all our First Responders (Fire, Police, EMTs) and our military.
My church had a really nice service today. We honored Tucson's 1st responders with an offering so they could get things they needed to continue to protect and serve.

Today, enjoy your family. Hug your loved ones.
Posted by My Life N Kids at 4:42 PM